Some critics think of Coriolanus as one of Shakespeare’s truly genius tragedies. It has plenty in common with King Lear (leader is misunderstood) and Macbeth (combat veteran tries politics). T.S. Eliot thought it was better than Hamlet. Me, I’m a sucker for everything by the late-period, slightly cynical, completely incandescent Shakespeare. So as a birthday present to myself, this month on What Happens in Shakespeare let’s boil down Coriolanus.

What happens in Coriolanus

Food shortages in Rome are causing unrest. The population is threatening to rise up against the 1%. They single out Caius Martius, an elite military leader who famously despises the unwashed.

The citizens do rise up, but war breaks out with the neighboring Volscians and that puts an end to the revolt at home. Caius Martius leads the Roman army to such a dazzling victory over the town of Corioli that he is given a new name: Coriolanus (“conqueror of Corioli”).

Back in Rome, the rulers urge Coriolanus to run for public office. He likes the idea in principle, but the problem with public office is the public. He has to win them over. He can’t stand the sight of these sheeple. They shop at Costco, they don’t have iPhones, they couldn’t identify a really good cabernet sauvignon if it bit them on the rhymes-with-heinous.

He tries to put on a show of relating to the voters, probably by rolling up his spotless shirtsleeves and being seen to grill his own organic grass-fed steak, but his true nature as an insufferable snob wins out. He finds himself making public speeches about how government by the people is a terrible idea.

By this time the people have had it up to the eyeballs, between the 1% hoarding all the corn and now the not-at-all-veiled insults. They run Coriolanus out of Rome.

In revenge, Coriolanus joins the Volscians and conspires with his former enemy Aufidius. Together they invade Rome.

Let me repeat that. The man runs for office, doesn’t get the popular vote, goes off in a huff, and invades his own country.

Two of his friends come to Coriolanus where he is camped outside the city gates to beg him to call off the invasion, but he won’t listen. Then his mother arrives to plead for Rome. In a surprisingly humanizing moment, he does listen to her. He changes his mind. The Romans hail his mother as the savior of the city.

Coriolanus returns to the Volscians’ home turf, where they give him a parade that befits a hero, name a dessert after him at the Hotel Volscian, and sell t-shirts with pictures of his beard on them in the metro stations.

But his new best friend Aufidius decides that Coriolanus’s refusal to occupy Rome amounts to treason when it comes to the Volscians.

So then some of Aufidius’ men assassinate Coriolanus.

For more about that audacious T.S. Eliot claim, here’s a story on Slate. 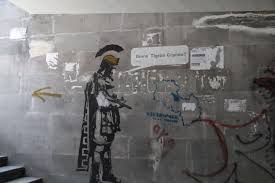