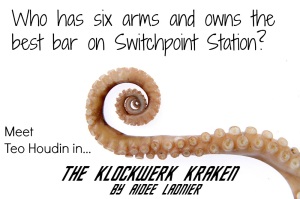 Today I am thrilled to host Aidee Ladnier, one of my favorite writers, whose intriguing new book The Klockwerk Kraken was just released. This book and I are clearly a match made in heaven, between my love of things steampunk and my love of things seafaring. Aidee has insights about the tentacle in literature. I’ll let her explain.

So my new novel, The Klockwerk Kraken, has a tentacled bartender. There, I’ve said it. I wrote a romance novel with a character who has tentacles.

But tentacles have actually been present in literature for a long time. Besides appearing in Norse sagas, creatures with tentacles have had poems, books, even screenplays written about them.

Most lovers of tentacles cite the poem by Alfred, Lord Tennyson, The Kraken:

Below the thunders of the upper deep;
Far, far beneath in the abysmal sea,
His ancient, dreamless, uninvaded sleep
The Kraken sleepeth: faintest sunlights flee
About his shadowy sides: above him swell
Huge sponges of millennial growth and height;
And far away into the sickly light,
From many a wondrous grot and secret cell
Unnumber’d and enormous polypi
Winnow with giant arms the slumbering green.
There hath he lain for ages and will lie
Battening upon huge seaworms in his sleep,
Until the latter fire shall heat the deep;
Then once by man and angels to be seen,

In roaring he shall rise and on the surface die.

Jules Verne’s Twenty Thousand Leagues Under the Sea has a famous scene where Captain Nemo’s submarine is attacked by giant squids. And lovers of horror are well versed in H.P. Lovecraft’s slumbering, tentacled god, Cthulu. Even Herman Melville speaks in Moby Dick about “the great live squid”. Most of the depictions of tentacled beasts are those of slumbering giants on the bottom of the ocean, quiet, until man awakens them.

But my hero, Teo is anything but hiding. He’s one of the few people on his planet that have traveled extensively in the galaxy before settling down at the Switchpoint Waystation, far from home and family. He’s a little lonely, but that quickly changes at the start of my book. I hope you’ll check out The Klockwerk Kraken and meet Teo, my tentacled hero.

BUY LINKS for THE KLOCKWERK KRAKEN: 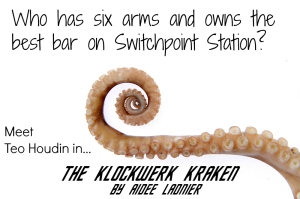 Brand new in the world this very day! I am most proud to brag about The Clockwork Kraken by Aidee Ladnier, who will be a guest blogger right here in a few days.

In the meantime, be the first to take home your very own copy from the publisher.