My story “Spring Can Really Hang You Up the Most” is in Of Dragons & Magic: Tales of the Lost Worlds!

This was a pretty cool example of social media working in my favor. On Friday there was a call for submissions for Witty Bard Publishing‘s first fantasy anthology, posted in a writer’s group I’m in on Facebook. The deadline was that same day. It just so happened that I had spent all week revising a fantasy story. It was ready to start getting rejected. But no! I submitted it to the anthology, editor A. Victoria Jones accepted it within a couple of hours, and it was published the very next day.

My Kindle is glowing with my copy of the anthology. I’ll be spending tonight reading the other stories. Just about the best cure for the Sunday blues I can think of.

Ghost Songs by Andrew Demcak took me by surprise. It’s driven by character rather than plot – not the norm for a YA novel, but it should be. Todd, the main character, is a gay teenager, but there’s no love story for him. In fact, the only thing that starts out resembling a romance turns into a horrible, far too realistic plot about sexual battery involving Todd’s best friend, Jennifer. Todd’s mother is an alcoholic and his father never makes an appearance – aspects of Todd’s life that could overcomplicate the story, or could serve as wallpaper, in a lesser writer’s hands. But Todd is a very believable child of an alcoholic: too wise and too worried for his 14 years. When his mother’s plot takes center stage, it’s heartbreaking.

Todd is also a gifted musician, and the descriptions of him playing the flute were right on the money for this former flute student. I thought it was going to be Todd’s orchestra class playing Dido and Aeneas that got through my defenses – I have a soft bit of personal history with that show – but for me it was all over when his orchestra teacher gives Todd an instrument that had once belonged to him. There was tearing up.

And then there’s Leroy, the ghost. This might be my favorite ghost in print. He makes himself known through smells. He bullies your bullies right back. And his motivation turns out to be surprising and satisfying. Best of all, he helps Todd become a hero — when he stands up for Jennifer, when he helps his mother get sober, and when he takes up the fight for himself.

MJ O’Shea, who wrote those delightful Blood Moon books we all loved so much, is giving away 2 copies of her and Piper Vaughn’s book Moonlight Becomes You.

Us Three by Mia Kerick asks tough questions and offers surprising answers with compassion and style. At first glance, this seems like a story about highschool bullying. Some of the choices the author made to portray that familiar problem are unusual in themselves: the target of the bullying, main character Casey, has a fantastically supportive home life and a nicely honed set of personal resources (where were the classmates who knew how to make crepes for a French class project when I was in highschool?). Not only that, his bullies are girls – an interesting pick, even though we never explore head bully Liz’s motivation. But! This is far from a simple bullying story. Each of Casey’s boyfriends (oh, another surprise — Casey is in a three-part relationship with 2 other boys) must wrestle with his own fears and find his own courage. All three boys confront layers of homophobia and societal conditioning when they claim each other as sweethearts. When they take that revolution of the heart outside to rally their peers in an anti-bullying campaign? You’ll be running out of the house to join them.

This blog is pretty new, but I just posted a bunch about my trip to Costa Rica on my other blog at alexanderskye.com. 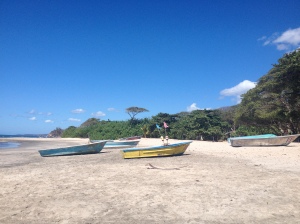 Good reading times last night at the Radar Reading Series! Radar is celebrating its 11th year bringing writers to the microphone whose work reflects the diversity of queer experience. I love the fact that it’s at the San Francisco Public Library, for free. And last night’s writers were terrific. We heard Ariel Gore read from The End of Eve, her beautiful memoir about taking care of her ailing mother. Ocean Capewell read a sexy story from her book The Most Beautiful Rot. Shawna Kenney’s anthology Book Lovers: Sexy Stories from Under the Covers had a so relatable introduction that she read (plus extra points for wearing that cute daisy headdress!). And Andrew Demcak gave us a bite of his new YA novel Ghost Songs, which has young queers and musical passions and dysfunctional parents and it’s set in the 80s and let’s face it, it could pretty much be about me.

I have a story in Toasted Cheese Literary Journal!